The English Cemetery in Malaga

My sister-in-law was over for a couple of weeks of winter sun and to take in some of the sights of Malaga and the village of  Villanueva del Trabuco.

She landed the day before ‘Dia de Los Reyes Magos’ or ‘Day of the Kings’ which falls on January 6th. Unfortunately, we had some rain for the parade so it was moved indoors.

Malaga is a beautiful city, especially in the spring when the beautiful blue Jaguarondi trees are in bloom. And there are plenty of sights of interest for the tourist and one such place is the English Cemetery.

The English Cemetery in Malaga. Where St George’s Church stands, is the result of the inspiration and concern of William Mark who was British Consul in Malaga from 1824 until 1836. 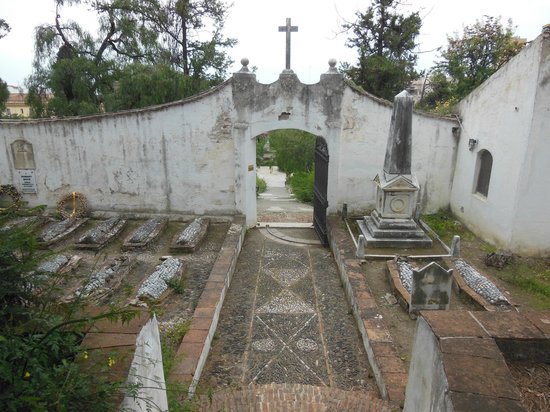 In the eight years, he had lived in Malaga before his appointment as Consul. He had looked “with great disgust” on the way Protestants had to buried on the seashore at dead of night.  Due to his persistent efforts, he was finally given permission to create a permanent cemetery on the Velez road outside the walls of the city.

This is the old walled cemetery, as it still exists today. Finished in 1831 and containing its poignant collection of graves covered with seashells. The adjoining mortuary is now the church library.

The Royal Decree ceding the land for the cemetery to the British Government was issued in April 1830. The following year the first protestant cemetery in Spain was established.

It now covers over 8,000 sq. m. and contains more than 1000 graves.  The cemetery is also a botanical garden with a number of unusual specimens of trees and plants.  With several well-known people buried there, it has become one of Malaga’s historical sites.

The English Cemetery is a beautiful and well-visited place of peace and quiet in the middle of a bustling city of over half-a-million people.

During the years immediately after 1830, the cemetery was greatly extended. In 1839-40 a “lodge temple” was built in a classical style with a small chapel and incorporating the cemetery guard’s dwelling.

With its fine Doric columns, this structure was adapted and enlarged in 1890-91 to become the present St George’s Anglican Church.  In 1856 a Gatehouse was constructed in Gothic style at the entrance to the Cemetery.